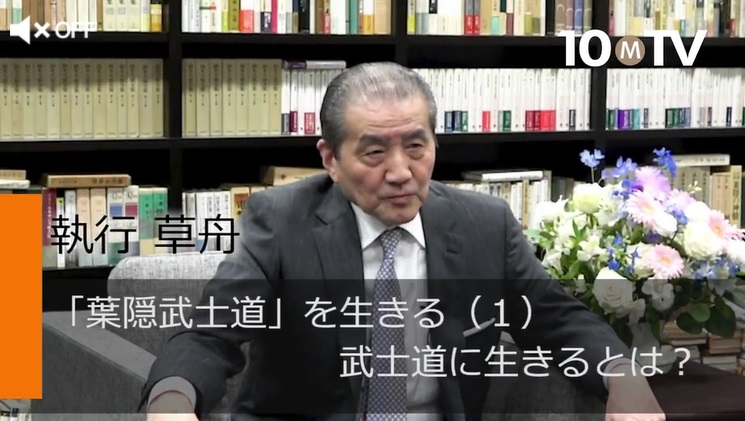 In 10mtv Opinion, distribution of new series “Hagakure––Live Bushido” has favorably started. In the past, a series of “The Quintessence of Bushido” was distributed and as it received a great favor from the viewers, this time, he will speak on “the living-way of Bushido” newly based on the philosophical thought of “Hagakure.” The genuine Bushido is ultimate living-way of “Jikosekinin (Self-responsibility),” brought forth by “Kakugo no Bunka (Culture of Resolution)”––. Shigyo Sosyu together with the interviewer, Mr. Kawakami Tatsushi, the chief editor of 10mtv Opinion, contemplates the route to its quintessence and revival.

This series is scheduled to be 12 lectures (the number of lectures may change).

It will be distributed once a week on Fridays, and this series will be 12 lectures.

“Hagakure––Live Bushido” (Total of 12 lectures will be distributed)
Jul.09 (Fri.) The First: What is Live Bushido?
Jul.16 (Fri.) The Second: “Self-responsibility” and “Love of Fate”
Jul.23 (Fri.) The Third: Life is to Fight against Fate
※Title of The Fourth and after will be announced when they are determined.