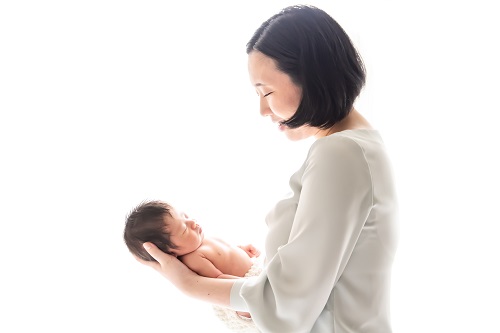 0-month-old son. New-born photo of my first child was taken during my lying-in period at home.

As I briefly mentioned in my Vol.53 column, I would like to convey the essential part of “Lying-in period,” which is seemingly known yet it is not.

First, what is Lying-in period? In general, it indicates 6~8 months after birthing, and recovering period of the womb, internal organs and hormonal balance to the normal condition, which had been greatly changed due to pregnancy. During this period, in order to concentrate on recovery, mother is instructed to fundamentally stay in bed and sleep except for taking care of the new born baby.

You might think that it is overdone to be bedridden for about 2 months not of illness but just by birthing. However, in fact the core is that “injury caused by birthing and newly occurring health disorders after birthing” are not included. For example, even in birthing by normal delivery with no problem, in many mothers’ cases, when baby comes out the surrounding flesh of birth canal is torn, and limbic muscles such as the sphincter muscle of the urinary bladder are fatally damaged. The recovery of such damage is insufficient only during Lying-in period. The damage by birthing even with normal easy delivery is said to be equal to a complete cure in 6 months of traffic accident. And in case of Cesarean operation, it is said to take the double time of one year for the wound to recover completely. Because of such reasons it is no exaggeration to say that “the wounds are not yet completely cured but for the time being the minimum period required for the internal organs and the endocrine system to return to normal functioning” is 2 months Lying-in period.

Because the damages which should recover during Lying-in period are related to hormones and internal organs, if the mother is over strained at this point, after childbirth depression and worsening of menopausal disorder could occur in future, and it will affect the later life and so the over strain must be avoided. From the far past, there is a word “Sango no Tokoage (Recovery after birthing),” and it indicates that after birthing mother should lay out futon bedding all the time and rest well for about 1 month and then finally put away bedding. This means that it is the period for the mothers to absolutely rest and it is true even with the old days mothers who had stronger legs and loins.

Even so, I actually sensed that there are considerable individual differences. Like myself, who is quite fast recovery type should move gradually from the early stage and it shall improve physical condition. On the contrary, who are totally exhausted by birthing or fundamentally slow in recovery, it is better to lie in bed for 2months or even 3 to 6 months. In observing various mothers, especially within 6 months after birthing, I have an impression of being strongly exposed to the effect of hormonal changes, and so there are variety of unexpected changes. I think it is better not to consider Lying-in period to be the fixed routine, instead it is better to consider it to be the period of observing and grasping individual changes, and respectively find the comfortable way to spend during this period.