I hope you are enjoying “Eggs of Cosmic Venus of “Sosyu Quotation,” which I introduced the previous time. My Today’s Words were Truth No.32. It said, “Since the ancient time of Plato, when speaking in correlation with the truth, many times they are in question-and-answer form (Dialogic). It is because the truth is Fluid.”
Plato is a Greek philosopher, studied under Socrates, Aristotle was his student, and his Thought is said to be the origin of Western philosophy. Though Socrates did not write a book considering the essence of philosophy is in dialogue, on the other hand, his student Plato left writings in dialogue-form. Especially in his Theory of Idea, which is the core of his thought, and attached importance to dialogue-method in the aspect of thinking. That is, “Idea of the Good” being the cause of the Truth to be the Truth, and figuratively speaking, it is like the Sun, and he thought that it must be perceived not by academic study but through Dialogue.
Come to think of it, my father Shigyo Sosyu also attached importance to taking time to have dialogue with the person, and he never treated lightly even if it was a child. Conversation with my father were mainly regarding the Cosmos・Life・Civilization, so in my child heart, “I just don’t understand what my father is talking about,” was my honest feelings. However, “It is alright not to understand,” is a good phrase, and started to think from what is incomprehensible, I think, it must have been the start of my “Philosophizing.” I would also like to continue the living-way of challenging the incomprehensible from now on. 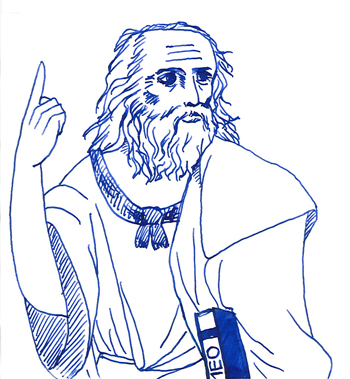