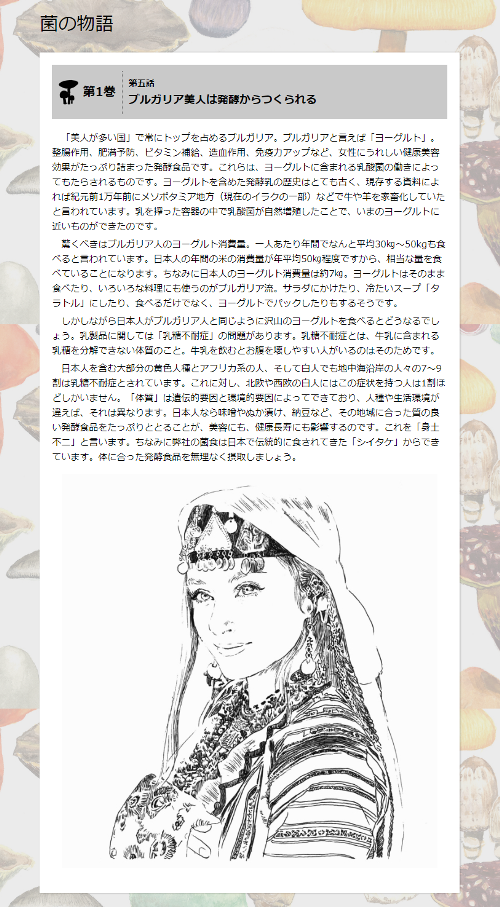 Click this illustration, and it jumps to The Story of Fungi.

Today, new content “The Story of Fungi” is opened. Focusing on “Fungi” ( in Japanese “Kin”) which is the core of our Fungi-food Enterprise, we would like to convey their fascinating power from various angles. As the each episode is quite compact, it is suitable for short term reading. We hope you will enjoy them.
Among the 8 episodes uploaded this time, in Episode 5 “Bulgarian Beauty is made by Fermentation,” the word “Shindo-Fuji” appears, and do you know the word? As it is my favorite word, I would like to introduce it on this occasion.
It was originally Buddhist vocabulary and read “Shindo-Funi,” and it was the word to indicate Shoho (the body as a result of the deeds up to that time) and Eho (natural environment as the basis of the body) are inseparable. And in the health food movement began in the Meiji era, it was read as “Shindo-Fuji,” and used to signify, “foodstuffs and traditional local foods of the land where one is born and brought up suits one’s body the best.”
Speaking of Bulgarian Beauty, the intestines of the Bulgarian are considered to have an optimized intestinal environment to the yogurt which suits the climate of the land through the long history, so when they eat large amount of their yogurt, they become active. However, if the Japanese carelessly imitate the Bulgarian, on the contrary, the Japanese may not be able to accept, and may damage the intestine. On the other hand, if the Bulgarian is served with the traditional Japanese food such as Natto (fermented soybeans) and Nukazuke (vegetables pickled in a fermented medium of rice bran and brine) as breakfast, the Bulgarian may not tolerate the unsavory smell and bad-taste and feel ill, and may even spoil the meal.
Yes, in fact, a human naturally senses, under the influence of the environment of where one was born and brought up and one’s innate intestinal bacteria, one’s local foods taste-good and also possesses the protective capacity to sense unfamiliar cooking taste-bad or feel hard on the stomach. Therefore, essentially, the healthiest way should be to eat what one likes and senses tasty. However, at the present time, in fact, by the influence of fast-foods and food-additives and others, this innate sense of taste・natural protective capacity of many people are weakened. If you sense your local foods “taste-bad,” then it might be a warning sign. Let us begin by returning to the traditional foodstuffs including our Kinshoku (Fungi-food), and regain our original power!