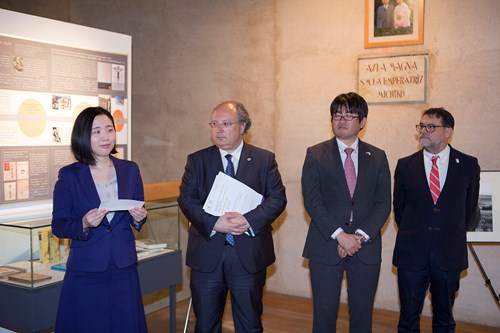 Today, we have opened “Exhibition Archives” which you could enjoy the images and information of the past art exhibitions. Not only the exhibition held at the permanent display floor at Kouji-machi, Tokyo, but also other exhibition sites could be viewed all at once.
Among them, [Now, Seek after Miguel de Unamuno] Exhibition held in Salamanca, Spain, and as most of the Japanese fans have not yet seen it, I think it is especially well worth seeing. During this exhibition, I went over to the location across the sea, and having attended the exhibition as well as engaged in publicity activities myself, I feel nostalgic in seeing the photos of these Archives.
The contents of this exhibition was in collaboration with the philosophical thought of Miguel de Unamuno, the president of Salamanca University, and the artworks of Toshima Yasumasa, Japanese painter who loved Spain. The people of Salamanca, of course read Unamuno’s books, yet Toshima’s paintings were their first encounter. How will their reactions be….!? To my surprise, it came out to be that those who had profound knowledge of Unamuno were much excited and came to see the exhibition number of times. They unanimously commented, “From Toshima’s paintings, Unamuno’s philosophical thoughts are markedly filtering through. It is amazing that such soul of Spain was depicted by the Japanese not by the Spanish!” In fact, Toshima enthusiastically read numbers of Unamuno’s literary works in Spanish, and strongly influenced by them, and they said that the influences are being transmitted through the canvas. To us Japanese who took part in this exhibition, and the people of Spain who viewed this exhibition, it was the moment that our hearts communicated very well through Toshima and Unamuno and the barriers between both countries have disappeared.
Other numerous displays could be viewed in this Exhibition Archives. We will renew the archives after the respective exhibition period is ended, please look forward to them. 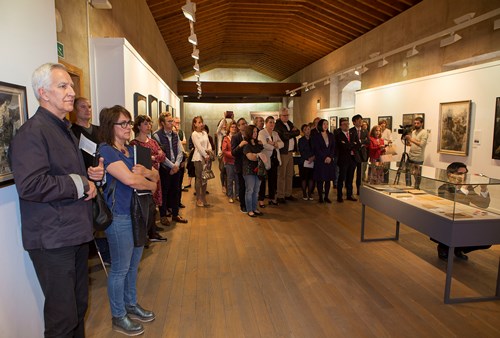 Members attending the Opening of the Exhibition.